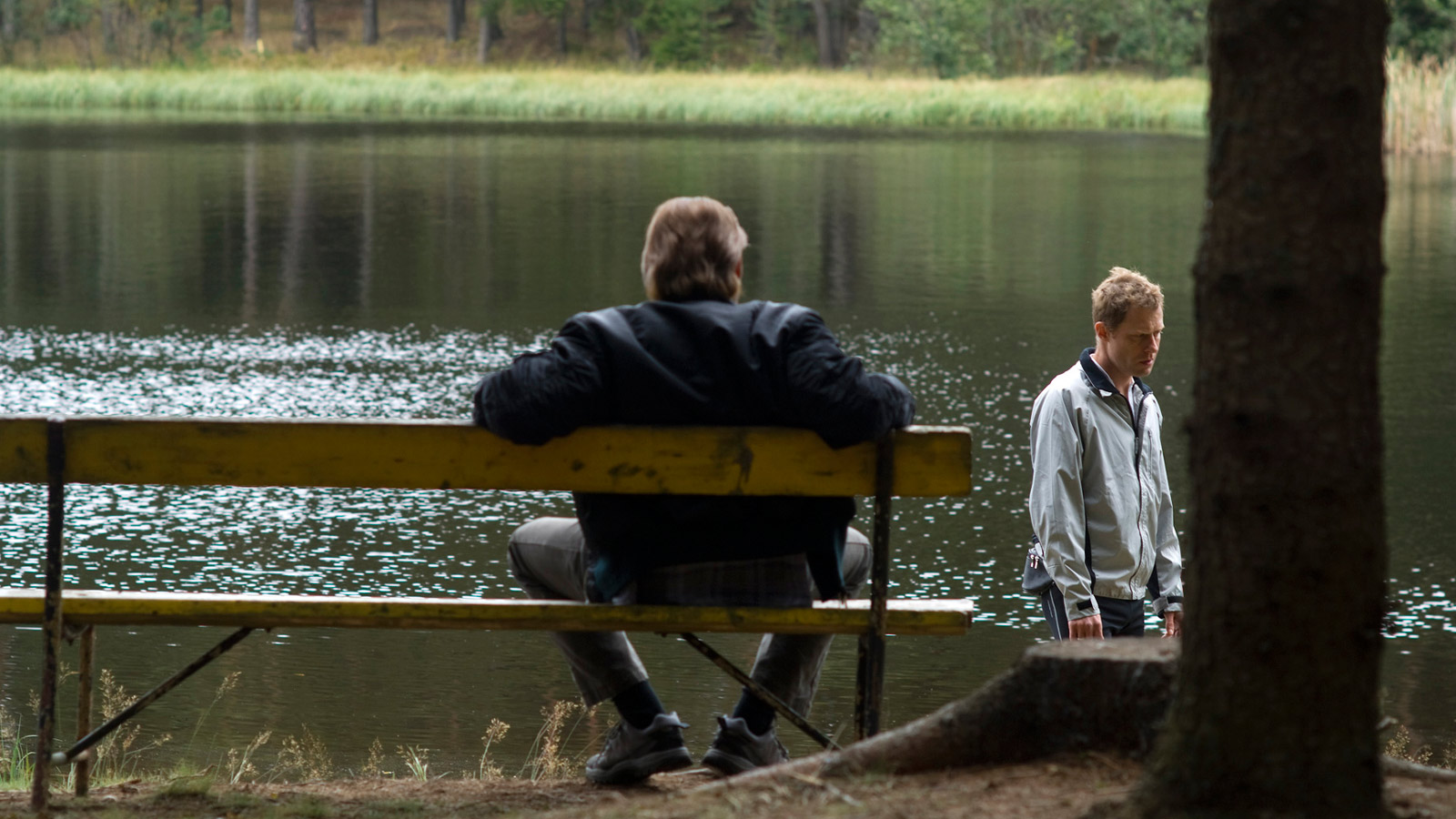 Revanche begins, puzzlingly enough, as a tale of two cities. To the policeman Robert (Andreas Lust), the town of Gföhl is his workplace, the environment he’s charged with protecting. He lives just outside of town with his wife, Susanne (Ursula Strauss), on a secluded, picturesque property where it seems it would take the better part of the afternoon just to mow the grass. And to Alex (Johannes Krisch), newly released from prison, Vienna is a sleazy and dangerous environment where lovely young foreigners like his Ukrainian lover, Tamara (Irina Potapenko), are drafted into the sex trade by greasy bosses who are well-versed in sexual and psychological gamesmanship. The film’s second-saddest joke is the name of the brothel where both she and Alex work: Cinderella.

If Alex’s concerns are urban — he wants to quickly generate the kind of scratch required to liberate Tamara from the increasingly threatening, pressure-cooker nature of her prostitution racket — Robert’s needs are distinctly suburban. His house has a room upstairs, a nursery, that’s fully appointed but empty. That yearning for children occasions the film’s saddest joke. On the shooting range Robert is a fine shot, with perhaps a too-itchy trigger finger, but in bed he’s shooting blanks. Of course, an audience expects to see the life of the cop and the ex-con intersect in a purportedly unexpected way, but what happens here is genuinely surprising, given that it results in a dramatic tonal shift at roughly the film’s halfway mark. The first half of the film is an overly familiar but edgy crime drama, hard-boiled in its explicit depiction of sex and matter-of-fact nudity and in its implications of brutal violence waiting just around the corner. The second half is something else entirely — a rumination on despair set out in the woods, where the quietness of nature and the monotony of repetition give human souls an opportunity to commingle in unexpected ways, and to heal.

So in its way, Revanche is a resolutely anti-city film. Alex isn’t written in the Travis Bickle mode, but his character turns hard in the film’s second half, even as he finds enough room and time to think clearly once divorced from the cruelties and other distractions of the city. Spielmann’s formal triumph here is in depicting Alex’s ritual of wood-cutting, which is elevated through repetition into a hypnotic exercise that suggests the state of his unquiet mind. The second section of the film moves much more slowly than the first, but it’s punctuated with eruptions of initially puzzling action and emotion that make it more insistently absorbing and effective. (A tabletop sex scene in the film’s final third is surprisingly potent.) By the time the credits roll, the scenario has turned into quite a potboiler, with the kind of twists that could fuel a Lifetime movie of the week and then some. But Spielmann has urged his actors in the direction of emotional credibility by way of impressively, intently physical performances. The glowering, singleminded Krisch — veins in his forehead bulging with the effort of grief — and the warm, motherly Strauss are especially terrific.

The convoluted scenario is given weight and coherence by Spielmann’s confidence, restraint, and ultimately quite ambitious sensibilities behind the camera. With his cinematographer, Martin Gschlacht, he favors long takes and action staged inside the camera with few cuts, which lends the material a languorous and uncontrived feel that balances the story’s reliance on coincidence. The film’s emotional throughline terminates and flowers in a gorgeous landscape shot, clouds casting vast shadows as they move overhead, that feels in context every bit as miraculous as the twin sunrise and sunset that bookended last year’s Silent Light. At that point, what at first looked like a rote crime thriller completes an elaborate and graceful pirouette that has transformed it into a morally ambivalent but unusually restorative drama.